How (Not) To Encrypt Google Docs 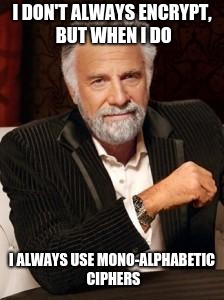 The other day I was searching online for ways to encrypt a spreadsheet in Google Drive and apparently there is no straight forward way to do this without 3rd party applications, scripts and workarounds. While the reasons why Google doesn’t provide this feature are somewhat understandable, I was more interested in the other solutions which popped out in the search results. One of them is by far the most popular and has been picked up and recommended by many technical guides websites like Lifehacker, Quora, Addictivetips and others.

Curious, I decided to read more. Then I noticed the Step 8 of the guide above states that after setting a password and encrypting the spreadsheet:

Now your data is fully password protected and nobody can read it without having the password you have set.

Unfortunately it didn’t take much to see the encryption was way to easy to bypass. Let’s start with a simple message and see what happens when we enable encryption:

Just by trying to encrypt a short text a few times with different keys we, a few facts were clear:

Although probably other attacks are possible, three are straight forward to do:

In some ways, cryptography is like pharmaceuticals. Its integrity may be absolutely crucial. But bad penicillin looks the same as good penicillin - Philip Zimmermann